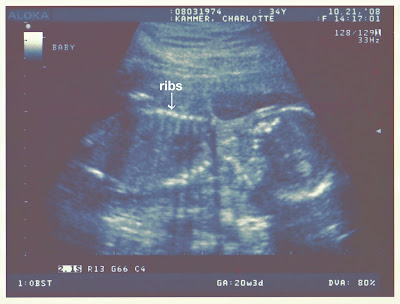 We had our ultrasound on 10/21 and found out - IT'S A GIRL! We are very excited. Greg admitted that he was hoping for a girl. He already has a daughter and all nieces, no nephews, so he feel comfortable with a girl. I think he also looks forward to being really tender with our daughter and having her call him "Papa." Not that a boy couldn't do that, as I tried to explain to him before the ultrasound, but he's just happy. He's not one of those guys who's like "We're going to keep trying until I get a boy!"

We've decided to stay in our 1 bdrm, 800 sf apartment for the time being so we're involved in some major downsizing (again - 2nd time in a year and a half). Ugh. It's daunting. I like my STUFF, darn it! But I don't NEED a lot of it.
Posted by Star Char at 8:05 AM

Congrats!!! Any names picked out yet?

YEEEEAAAAAAY! My CharBs back!!!! I've missed you here. What a better way to get back into it than with recent pics & announcing your little "dancer". I'm sooo excited to meet that blessed little bundle :-)